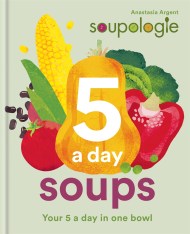 A powerhouse collection of soups and meal pots that deliver 5 portions of fruit and veg (sometimes more!) that are also low in calories, sugars,…