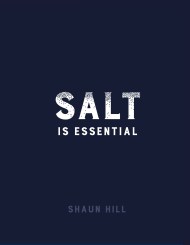 Food needs salt. The quantity is a matter of personal taste but some presence is essential and little is more disappointing from the eating perspective…