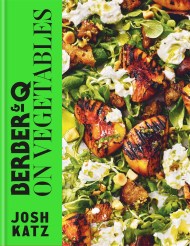 'Josh Katz cooks in technicolor. [There is an] interplay of smoke and cumin and paprika; of sugar syrups and rose and pomegranate; of great cuts…